Home Featured Health Riding the senior bus to the dispensary 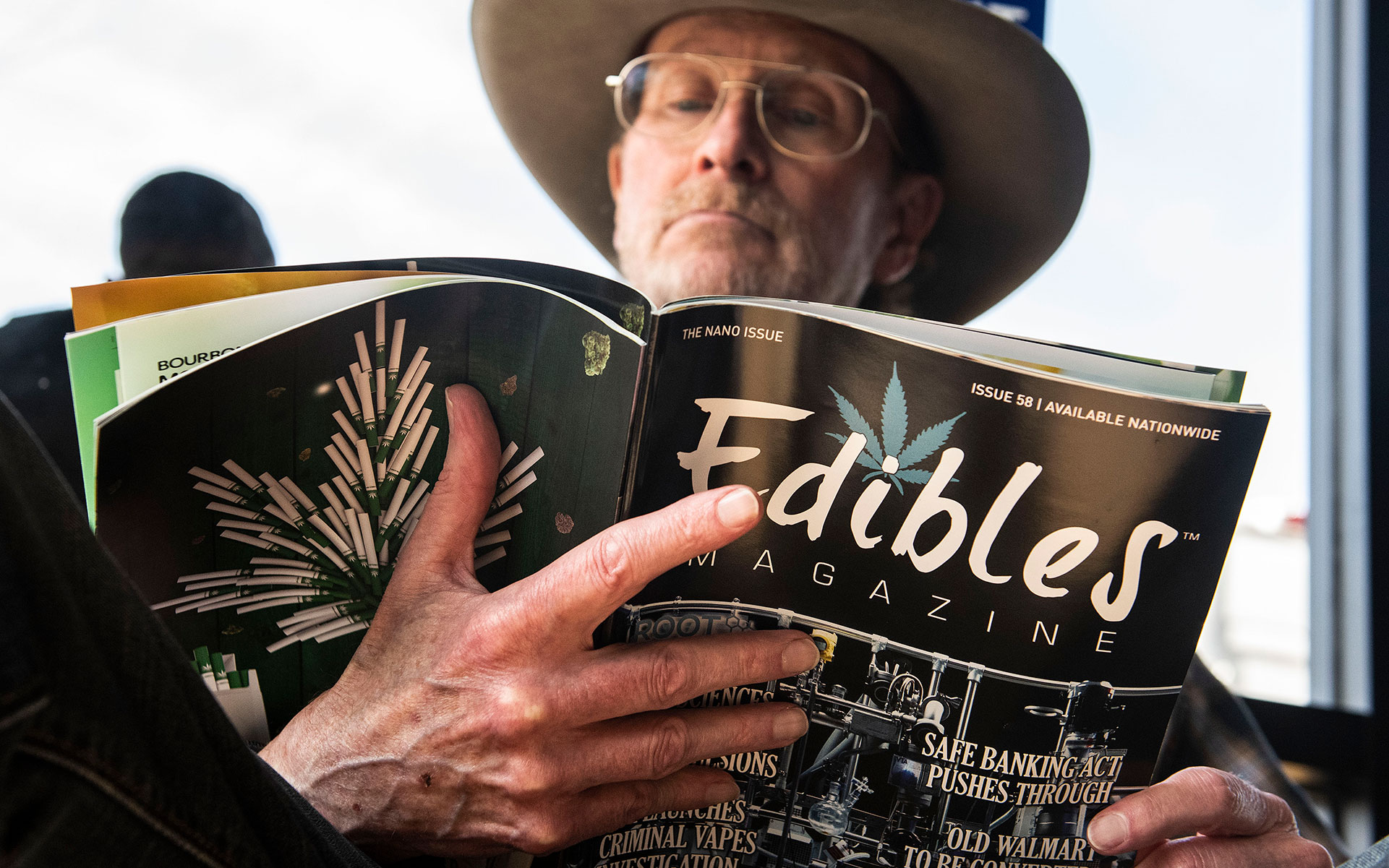 Michael Mclean, a resident of Laguna Woods Village, an age 55 and up community in Southern California, reads about edibles in the lobby of Bud and Bloom medical and recreation dispensary in Santa Ana, Calf. on Tuesday, Feb. 18, 2020. (Nick Agro for Leafly)

With a loosening of marijuana laws nationwide, a rising percentage of Americans of all ages seem to be giving weed a try.

Bud and Bloom, a dispensary in Santa Ana, Calif., has been shuttling dozens of seniors to and from Laguna Woods Village every third Tuesday for almost three years. Once there, the seniors sit through educational presentations on topics from compliance to topicals, hear from a few sponsors, and munch on some free lunch.

(Some seniors skip the presentations altogether, choosing instead to beat the crowd into the dispensary—but none skip the free lunch.) 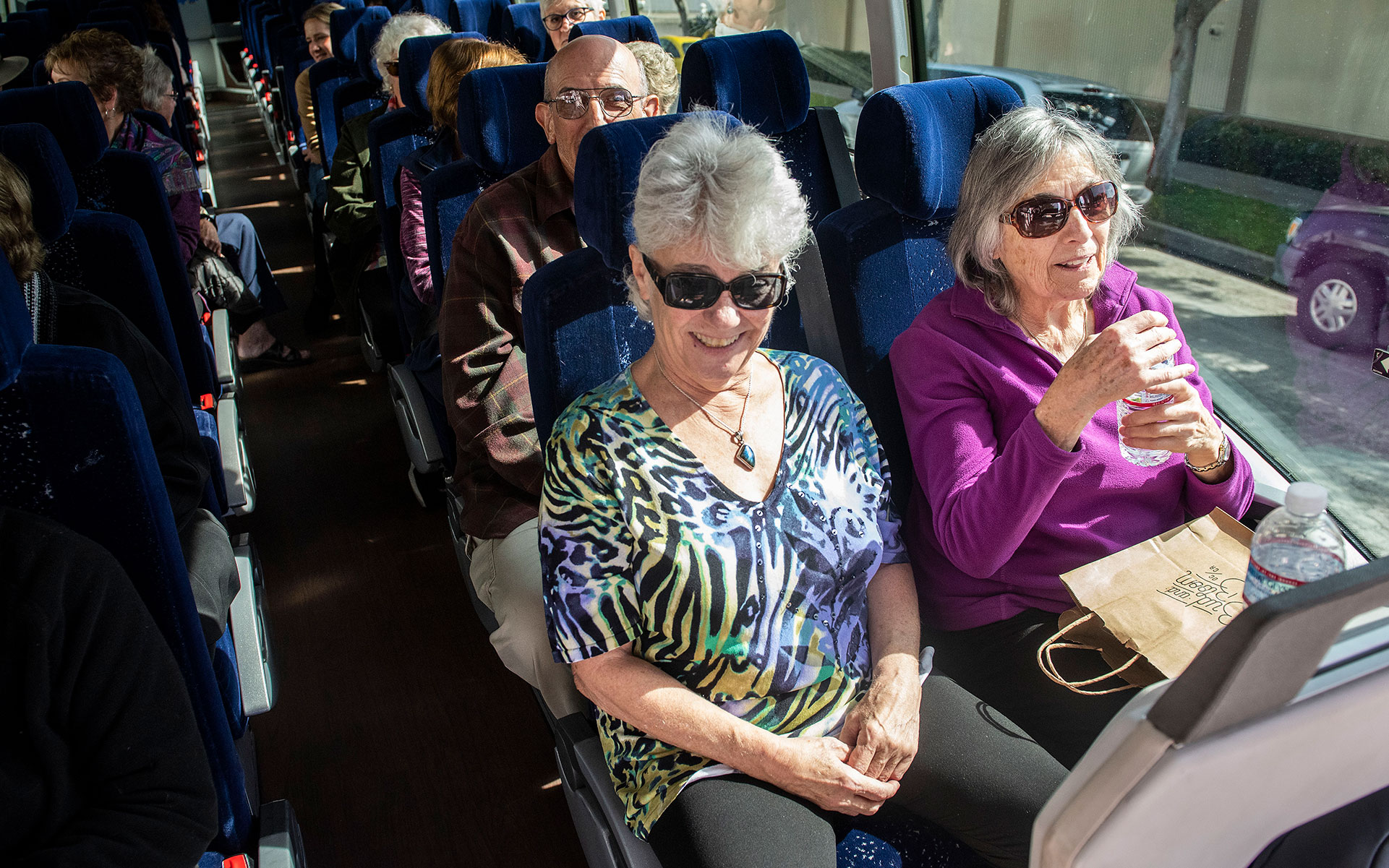 The seniors’ motivation for riding the shuttle is mixed, but for many, it’s pain relief.

“There’s always people that have tried it before, but I’ve also noticed a lot of new faces, a lot of really scared people who are in pain,” said Sandy S., 66, an experienced cannabis user who called the shuttle “a godsend.” “They’re looking for help, and they haven’t been able to find it. So, they’re adding cannabis as an option. They’re usually repeats after that.”

Regular shuttling senior, Richard Levy, 73, turned to the plant for pain. But he also admits to taking an extra dose before he goes to his Laguna Woods drum circle meetings. He said he gets more compliments on his music on the nights he takes that extra dose: “It helps me be more creative.”

Sharon, 78,  has three autoimmune diseases. Five years ago, her discomfort reached a breaking point. “I was in a bad state. I was feeling really ill,” she said. Cannabis gave her the relief she needed: “It’s made me feel so much better: I sleep better, I have less pain, and I feel better emotionally because of the release of pain.” 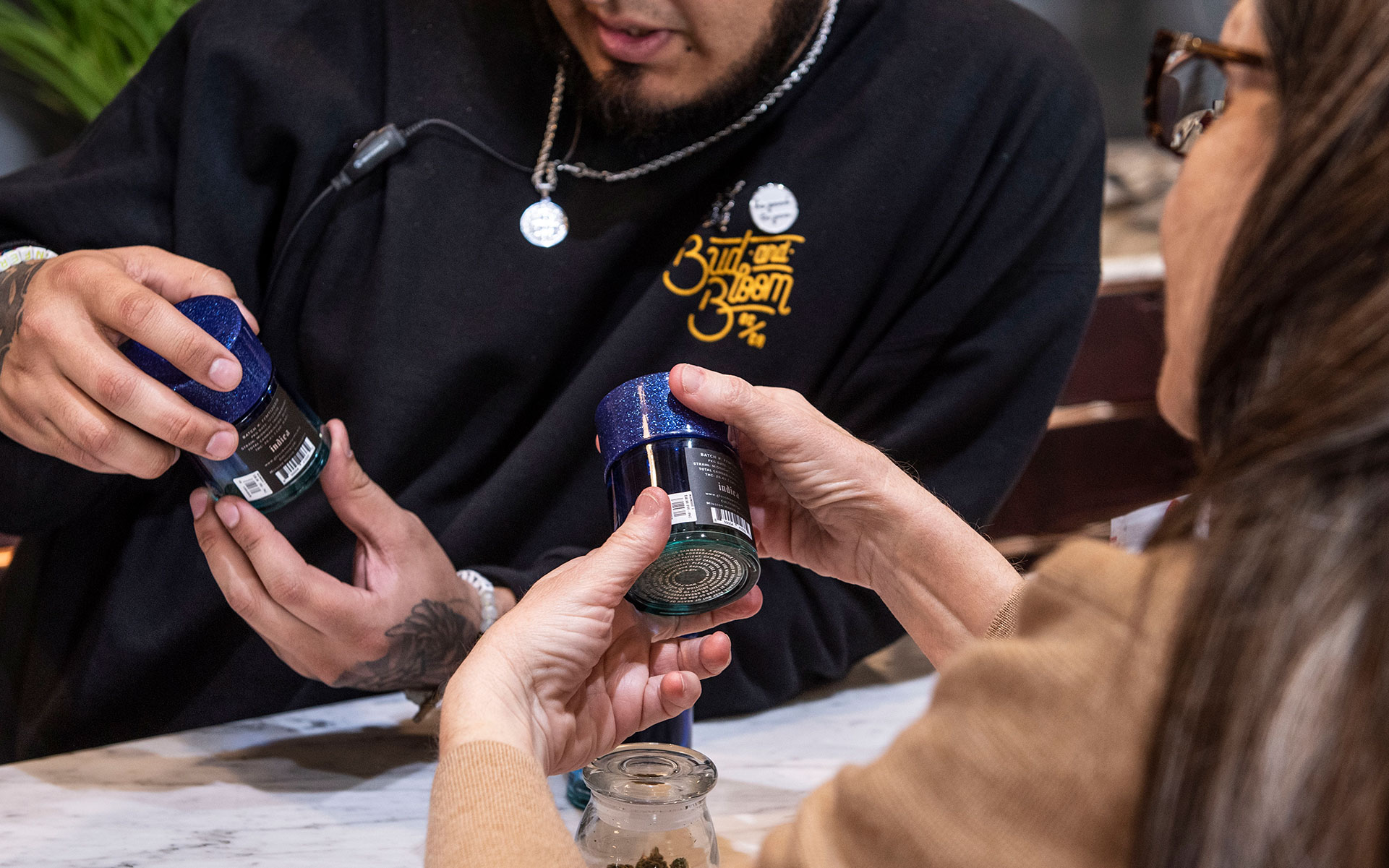 Charlotte Witsoe, 76, a first-time shuttle user, hasn’t found cannabis to be the “miracle drug” or cure-all like some of her peers. She had been using cannabis on and off for nine years in an attempt to treat her fibromyalgia, to no avail.

“It didn’t really help me, but it made it difficult to function the next day. I would take it to sleep, but I would really feel it the next morning. I kind of gave up on the whole thing,” Witsoe said, adding, “I thought today I’ll kind of take a look again, since it’s been several years.”

When surveyed about what they’re purchasing, many seniors said they opted for tinctures or edibles, like gummies and chocolates, more so than flower. Many cite poor lungs as their motivation for steering clear of the smoke. 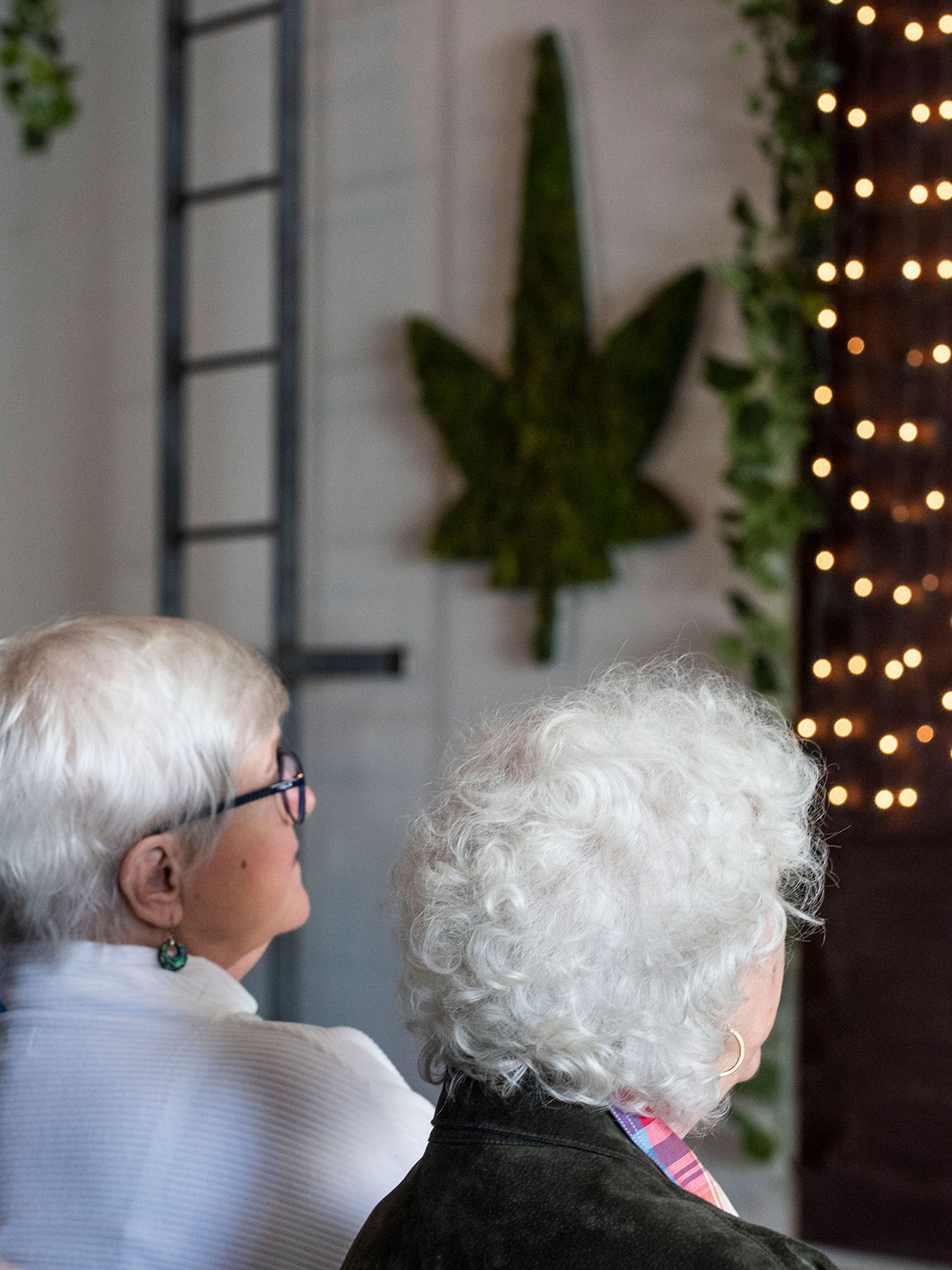 Seniors from Laguna Woods Village, an age 55 and up community in Southern California, listen to vendor presentations at Bud and Bloom medical and recreation dispensary in Santa Ana, Calf. on Tuesday, Feb. 18, 2020. (Nick Agro for Leafly)

The seniors had differing opinions when asked what they thought of the pricing.

Some believe it is fair. 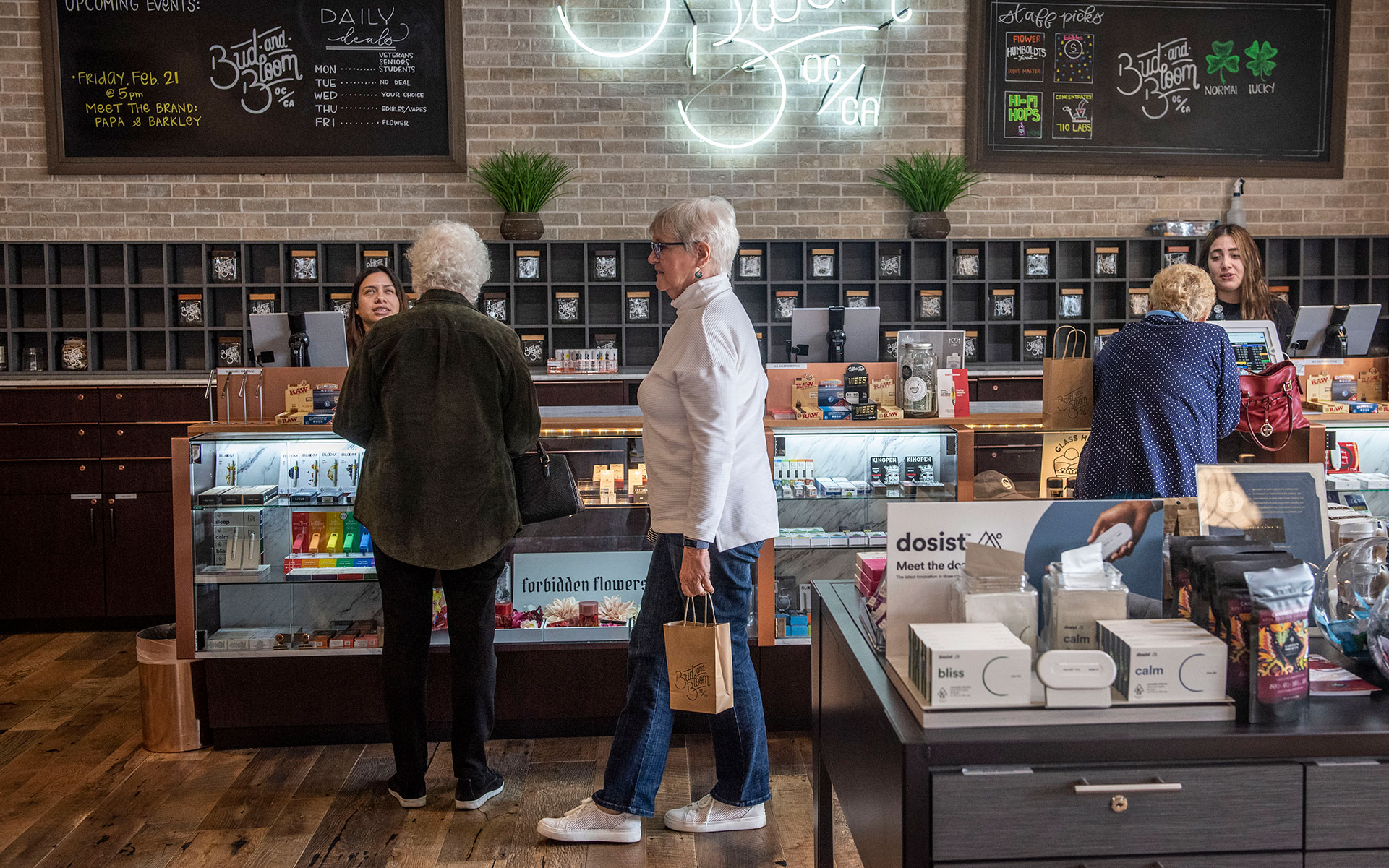 Others, like Laura Linda, 78, consider the cost—especially the taxes—of their cannabis purchases “outrageous.”

Cindy Johnson, 58, a former nurse, agreed: “I knew there was a state tax, but I didn’t realize there was a city tax. By the time you pay both, I can see where people do go buy it on the unregulated market.”

Johnson’s right about that: High taxes across California are indeed keeping the unregulated market in business and, in some cases, even bringing new customers—those who discovered a liking for the plant but decided to take a stand against the high taxes at dispensaries.

But overall, the seniors are not interested in buying on the unlicensed market.

These concerns about the volatility of the unregulated side of the industry are further reinforced by event sponsors like SoCal-based cannabis testing lab CannaSafe, whose presentations on Tuesday advised sticking only with licensed dispensaries.

It makes sense for Bud and Bloom to implement this kind of program: Brand loyalty to the storefront is consistent among the seniors that take part. But while Bud and Bloom, and dispensaries like it, are a haven for many, dispensaries are not pharmacies or healthcare facilities (yet). As such, anecdotes of portions and dosing problems were a problem across the board. 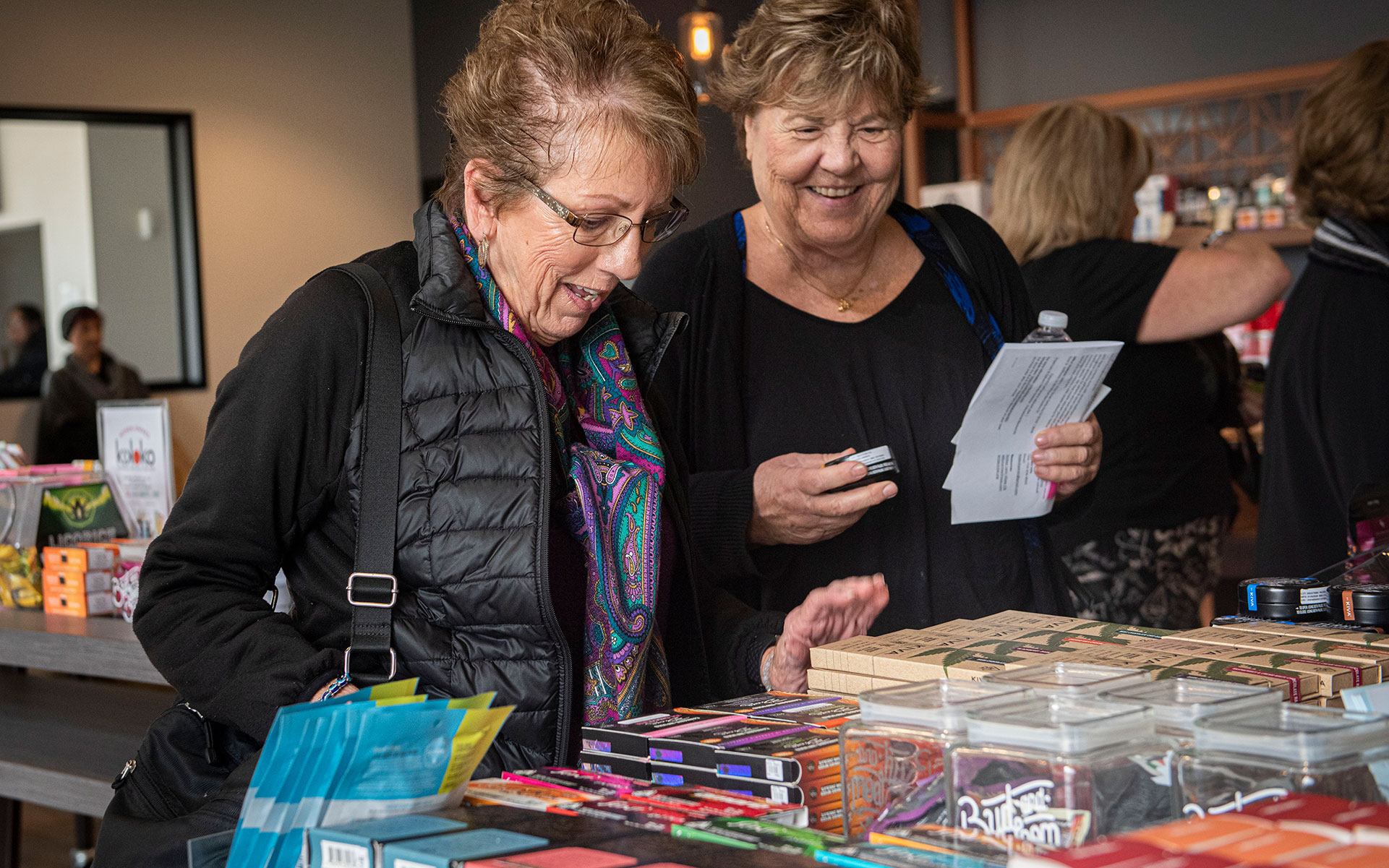 Van Gunst, a repeat shuttle rider, is a fan of CBD- and THC-infused chocolates. But during a 2019 visit to Bud and Bloom, she noticed her favorite brand, Kiva, was out of stock—so she opted for a chocolate bar made from a different company.

When she got home, she took what she thought was her typical dose, but ended up so high she didn’t leave the house for two days. “I was not right,” she added.

Van Gunst blamed herself for the error: “They were sectioned, but they were smaller sections, so I thought, smaller than the Kiva … I don’t know. I just didn’t think. I didn’t think it through.”

This anecdote, while endearing, serves as a cautionary tale: As much as a budtender may know about the plant, she or he is not a replacement for medical professionals. Portion control, then, must be up to the consumer.

Many fondly recount their long histories with the plant. Linda, who used to work in research on drugs and abuse, has been using cannabis almost daily since 1962. “I cook with cannabis too,” she added, laughing. “So if you come to my house to eat spaghetti, you’ll eat seconds because you get the munchies!”

Still others see it as something they missed in their youth and are curious.

“For someone who lived through the ‘60s and ‘70s, I’ve never tried marijuana. Today I am using it primarily for pain,” said Jane Schultz, a first-time shuttle rider and first-time cannabis user.   “But I do think it would be fun to take an extra dose and just see what happens. I missed that whole time in my life!” 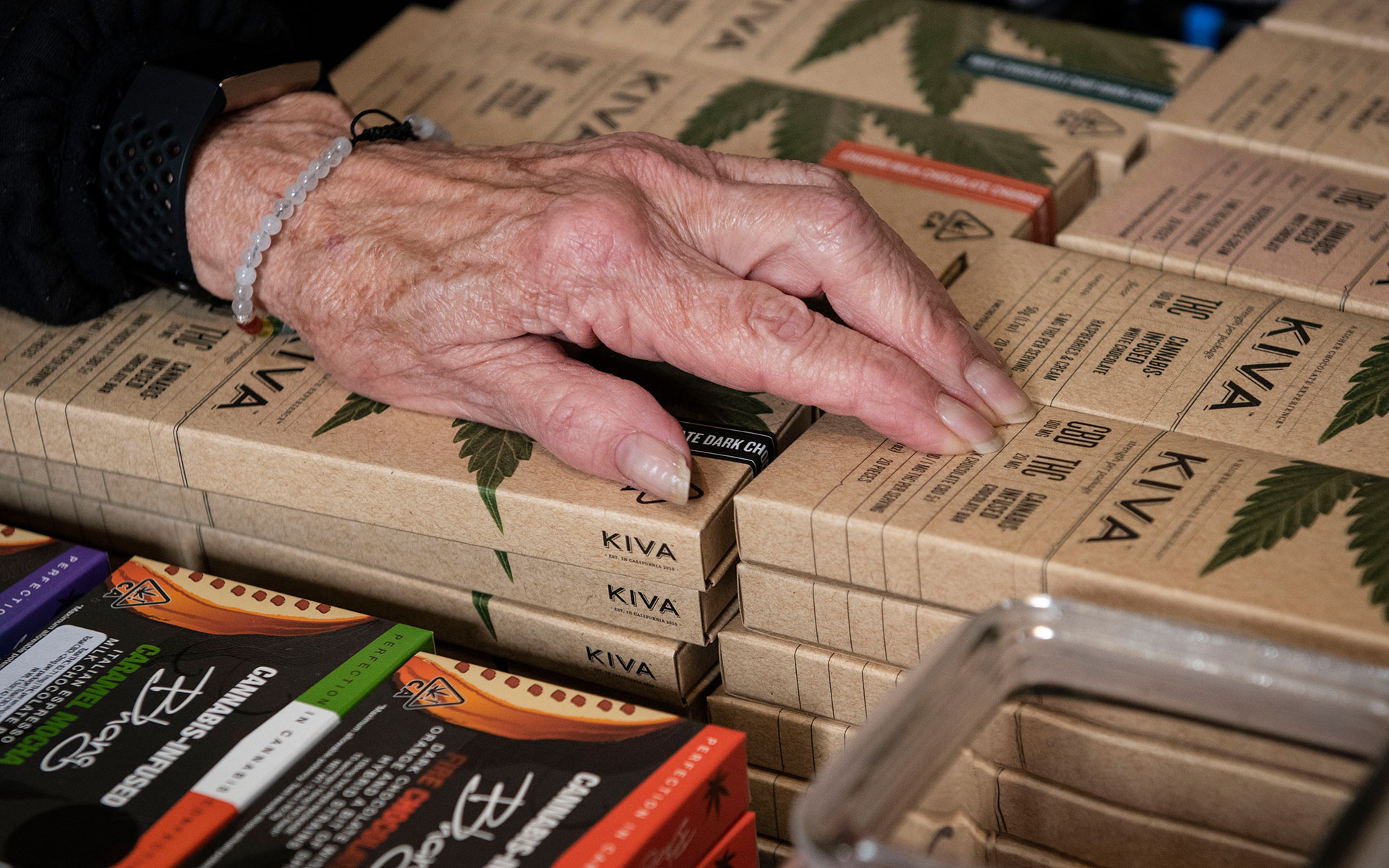 A senior from Laguna Woods Village, an age 55 and up community, browses cannabis products at Bud and Bloom medical and recreation dispensary in Santa Ana, Calf. on Tuesday, Feb. 18, 2020. (Nick Agro for Leafly)

But whether they’re seeking less pain or more fun—or some combination—it’s clear the Laguna Woods seniors just want the same thing as the rest of us: to feel better. 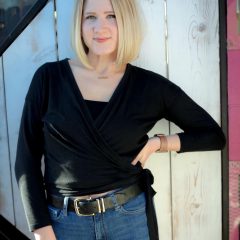 Roxy Szal is the associate digital editor of legacy feminist publication, MsMagazine.com. A former middle school English teacher and Teach for America alum, she holds her masters in journalism from the University of Nebraska-Lincoln. Her typical beats cover media, feminism, cannabis, and social justice or some magical combination.

What are the strongest cannabis strains?

What Is a “K-Hole” and Why Does Ketamine Cause This Experience?

How to store your edibles for optimal safety and freshness

How To Come Down From A Marijuana High Quickly

Whoopi Goldberg Exits the Weed Game Due to Ever-Changing Regulations

Everything You Should Know About the MagicalButter Machine